LNG, a groundbreaking choice for the shipping industry

Total has leveraged its integrated business model to forge an ambitious partnership based on liquefied natural gas with CMA CGM. Read more about LNG as a marine fuel in CNBC's article featuring this partnership and a short video on the construction of our new LNG bunker vessel.

The IMO’s sulfur cap represents a major change for the world of maritime transportation. And many industry players recognize that LNG bunker enables them to meet the requirements imposed by the new regulation, while also sharply reducing emissions. Leveraging these advantages, Total and CMA CGM signed in 2017 an agreement to supply 300,000 tonnes per year of Liquefied Natural Gas (LNG) in Northern Europe. This volume, unprecedented in the history of LNG bunker, will fuel CMA CGM’s nine newbuild container ships, which are scheduled for delivery from 2020 onwards.

Used as a marine fuel, LNG sharply reduces emissions from ships, resulting in a significant improvement in air quality, particularly for communities in coastal areas and port cities. Read more about the advantages of LNG and the partnership between Total and CMA CGM on CNBC’s article here. 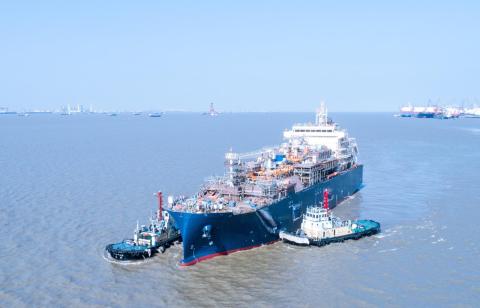 Built by Hudong-Zhonghua Shipbuilding at their shipyard near Shanghai, the bunker vessel is fitted with innovative tank technologies, with a capacity of 18,600 cubic meters, provided by the French company GTT. Designed to be highly maneuverable, the 135-meter-long vessel will be able to operate safely in the ports and terminals considered. In addition, she meets the highest environmental standards thanks to the use of LNG as fuel and complete reliquefaction of boil-off gas.

The vessel was launched on 18 October 2018 following the signature of a long-term charter contract between Total and Mitsui O.S.K Lines (MOL) in Febraury 2018. Watch the video below on the construction of the vessel and the use of LNG as marine fuel.